Axe Throwing League: What is it? And why is it so popular?

Axe throwers have joined forces and formed Axe Throwing Leagues, it is especially prevalent these days, with the emergence of the sport of axe throwing around the world, but it is a well-known fact that axes have been used for thousands of years for much more than throwing. After all, it is one of the oldest tools used by mankind.

Before the modern axe, the stone age hand axe was used without a handle, only later it was attached to a wooden handle. The earliest examples of axes with handles have stone heads with some form of wooden handle attached in a method to adapt to available materials and use. As these technologies developed, copper, bronze, iron and steel axes appeared. Axes these days are composed of a head and a handle.

Stone axes were sometimes believed to be lightning bolts and were used to protect buildings from lightning, as it was believed (mythically) that lightning never strikes the same place twice. This has led to some bias in axe distributions.

They were also important in superstition. It was rumored that a thrown axe could ward off a hailstorm. Sometimes an axe was placed in crops with the blade facing the sky to protect the crop from bad weather. An upright ax buried under the windowsill of a house would keep witches away, while an ax under the bed would “secure male offspring.”

Axes are also prevalent in Viking culture, as evidenced in the hit show Vikings.

Most modern axes have steel heads and wooden handles, typically hickory and ash in Europe and Asia, although plastic or fiberglass handles are also common. Modern axes are ordered by use, size and shape. Short-handled axes designed for use with one hand are often referred to as hand axes, scouting axes, or hatchets, but the term hand axe also refers to axes without handles. Hand-axes tend to be small axes with handles, often with a hammer on the back (the butt). As easily made weapons, axes have often been used in combat.

It has been almost 13 years since urban axe throwing was brought to the masses, using the axe as a tool to bring people together. In 2006, a group of friends were bored in a cabin outside Toronto and decided to throw an axe at a log. Little did they know that this innocent way to pass the time would soon become the creation of a worldwide sport.

It wasn’t long before the Axe Throwing League became very popular and today it is present in more than 150 countries around the world.

The league season is 8 weeks long. During the first 7 weeks of competition, each player plays 4 matches during which the score is accumulated and added up. In the last week the 8 highest scoring players face each other in a double elimination match.

Generally speaking, if you sign up late or miss a week, you can make up the lost shots for up to 2 weeks. On the other hand players may use axes from the facility or bring their own axe as long as it meets the guidelines of the league rules. 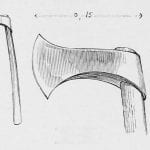 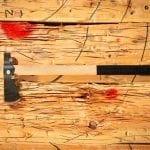 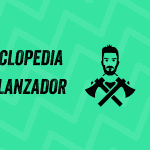